Shaping health and equity in the city

While official government rhetoric highlights health and wellbeing, ‘levelling up’ and tackling the climate/ecological emergency, the reality of action on the ground often tells a different story. So said Hugh Barton as part of a talk with Marcus Grant to highlight their updated tome on urban design and health, the third edition of Shaping neighbourhoods for local health and global sustainability.

The updated book, co-authored By Barton, Grant and Richard Guise, covers many of the UN Sustainable Development Goals and offers a holistic and integrated approach to healthy and sustainable placemaking. 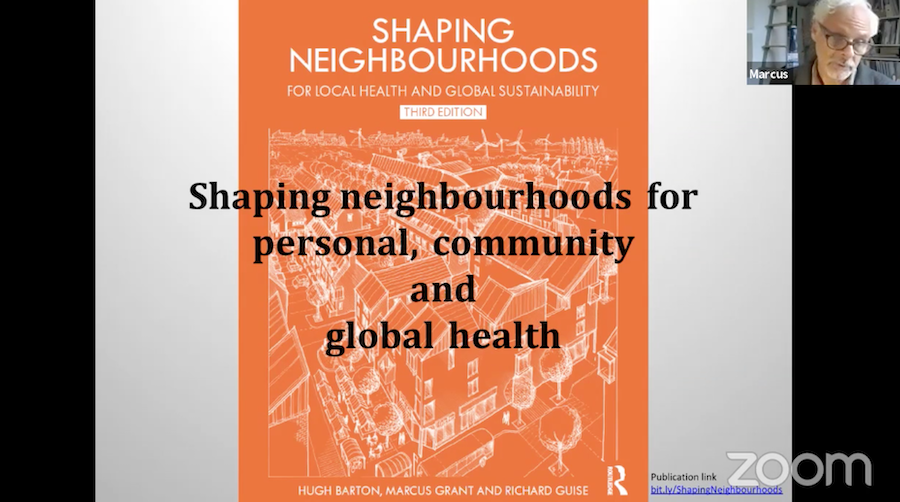 “What we’ve attempted to do is provide tools for that systemic working, and lavishly supported it by lots of cross-referencing between all the different factors,” explained Grant. “So as you optimise one thing, you can look at the other things where there might be unintended consequences. This is one of the unique factors that users have enjoyed in previous editions.”

Several case studies are featured, including Kuopio in Finland, which compares locations and design elements by measuring the walking fabric, the transit fabric and the car fabric. According to Barton, success here is judged by whether the walking and the transit fabric are increased. Another good example is Utrecht in the Netherlands, which has linked all its decisions and policymaking areas to the idea of healthy living.

On achieving equity in housing, there is much to be learnt from Vienna and Freiburg, two cities that embody public control of development land on any scale. “The land value uplift from development or redevelopment is shared,” explained Barton. “Critically, there are rent controls, which suppresses the value of property to something that is more affordable, and planning is seen as a creative not just a regulatory activity.”

“Another aspect is working with people,” he concluded. “At the neighbourhood level, it’s so important that people feel that they are deeply involved.”

The role of density in shaping communities and healthy living was the subject of much debate during the pandemic, which shone a harsh spotlight on the inequalities in society and in cities. This provided the context for research undertaken by keynote speaker Prof Rachel Cooper, from Lancaster University, who looked into how urban density was linked to Covid-19.

“We have seen the affluent fly to the country,” she said. “We have seen a difference in equity in how people can live through the pandemic. Do we have to rethink urban design post the pandemic?”

“There is a number of advantages and disadvantages of density,” she said. “For example, density in mobility terms enhances accessibility, enables people to live closer to shops, and makes transport more viable and efficient. Of course, the more cars you have, it exacerbates traffic congestion. In terms of land, the reason for increasing density is making better use of resources, including natural resources, and using existing infrastructure. On the other hand, it reduces the area’s capacity to absorb rainfall. 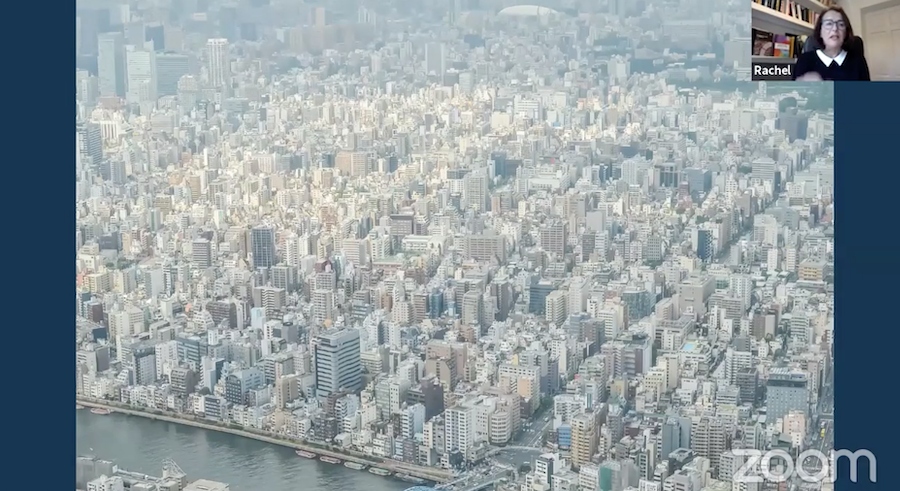 In trying to understand what was happening in relation to Covid-19 and density, Prof Cooper concluded that most early and preliminary studies in the USA identified that density was not linked to Covid-19 infection. “Covid-19 death rates were lower in denser countries and higher in less dense countries,” she said. “Connectivity between countries matters more than country density for pandemic spread and lethality.”

Post the pandemic, different typologies are likely to be explored. “Before the pandemic, there was a lot of high-rise,” explained Prof Cooper. “Now, there is more lower-rise, where people can walk down the stairs and have greater access in the building. There is less use of high rise to form density.”

And this is a particular problem in developing countries in Asia and Africa. “One in six living in London and one in five in New York tested positive for antibodies,” observed Prof Cooper. “In India, in the Mumbai slums, it was one in four, if not higher.”

The urban poor in many developing countries are forced to use shared facilities such as public toilets, they lack basic services such as access to clean water, and less access to medical care also exacerbates their situation.

Density in lifestyle also affects quality of life, noted Prof Cooper, who cited factors such as the amount of alcohol and tobacco we consume, our activity levels, and how nutrition influences non-communicable diseases, such as heart disease, diabetes, cancer, lung disease, and depression.

But she stressed that what the research shows is that the same urban design principles that applied pre-Covid are those that still apply in designing pandemic-resilient, healthy and sustainable cities.

The health, economic and social inequalities exposed by Covid-19 has given added momentum to evolving notions of equity and inclusion in cities, and there is a growing acknowledgement that inclusion encompasses something much broader than just physical access. With the Royal College of Art’s Helen Hamlyn Centre for Design (HHCD) celebrating its 30th anniversary this year, it provided an opportune time for its outgoing chair, Prof Jeremy Myerson, to put together a new book charting the development of inclusive design over a 30-year period, by taking 30 everyday objects and environments on which the Centre has had an influence.

He explained how when the HHCD launched in the early 1990s, a lot of inclusive design was in “the special needs’ ghetto of aids and appliances”. Things have now evolved.

“We’ve moved away from standalone aids and appliances to services and systems,” he said. “We’ve gone from focusing on a solution to a deep dive of problems. We’ve gone from not simply matters of age and ability but now we’re looking more at gender, race and social equity. Usability has been expanded to include desirability. It’s not just about physical access but the broader notion of social inclusion. It’s not just about physical health but also about mental wellbeing. It’s not just the built environment, as there is a whole digital realm and digital space. And it’s not just about reducing barriers and making things easier; it’s about building resilience in citizens and in healthy cities.”

These trends are illustrated in the 30 design case examples spread throughout the book. A redesign of the ambulance vehicle, for example, came about because the HHCD took a systems approach to the problem. 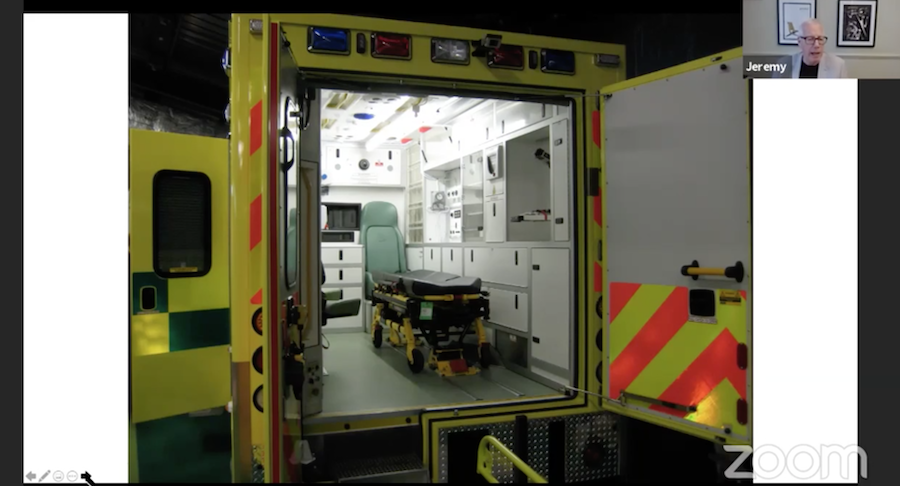 “The London ambulance was dark, intimidating, difficult to clean, inefficient, and packed with all types of equipment for all types of emergency,” explained Prof Myerson. “What we were trying to do was take pressure off primary care centres and hospitals, where you had ambulances queuing outside for hours, and trying to move to a new model where people didn’t always need to be taken to hospital but could be treated by ambulances and in walk-in centres and clinics in their community.”

Central to this strategy was an ambulance with its own mobile sterile treatment room, and although the prototype never made it to production, over the years, ambulance trusts and manufacturers have replicated many of the Centre’s features and innovations.

Another project, ‘Our Future Foyle’ in Derry/Londonderry, Northern Ireland, shows the shift away from purely physical access to the environment to the broader notion of social inclusion, and to understand mental health, not just physical health.

It involved the redesign of a six-mile stretch along the River Foyle, a well-known suicide blackspot and an area that has been traumatised by sectarian violence.

Working with the local community to redesign the riverfront to make it more inclusive, the Centre introduced two key interventions. One is Foyle Bubbles – a series of riverfront kiosks occupied by local businesses to provide “a bead of economic and social activity along the riverfront”, as well as creating natural surveillance. The second intervention is Foyle Reeds – a series of digital reeds lined along the riverbank that light up. Local businesses and people can own a reed and control it from their phone, and the reeds will change colour, acting as “a soft barrier” to discourage suicides.

But while inclusive design has broadened its parameters, how can this support greater health and equity in our cities? In Prof Myerson’s view, there is a need for the kind of social activism that informed the development of inclusive design. “That’s got to continue,” he stressed, “and there has to be a continuation of intense collaboration and co-design with businesses, community groups, and academic partners. And the third element, which is so important, is to maintain a belief in the creative power of design.

• Designing a world for everyone: 30 years of inclusive design (published July 2021, hardback £35) is on special offer for HCD 2021 delegates. Go to www.lundhumphries.com and use the code DLC21 at the checkout to receive a 20-per-cent discount and free UK postage.