Music, health and the city: a utopian vision

Music is the most under-recognised, undervalued, under-utilised asset on the planet, and it isn’t being used to its full potential. This was Julia Jones’ opening salvo at Health City Design 2019, as she delivered a keynote on the power of music to help improve health and wellbeing, and become part of a city’s utopian vision.

A music neuroscientist and chief executive of specialist design agency and consultancy Found in Music, Jones urged delegates to recognise the growing evidence base for the impact that music can have on health and wellbeing, the economy, and social cohesion.

Originally working in sports psychology, Jones started working with GPs to encourage them to send patients to exercise-to-music classes. This led to work in other sectors, such as retail, brand marketing and customer experience.

Other work sectors now also want a piece of the action, including placemaking, workplace design, and workplace wellbeing.

“It doesn’t matter who the target user is,” explained Jones. “They’ve all got the same brain.”

The power and influence of music reside in its ability as an art form to engage people – often on a subconscious level.

UK Music, a campaigning and lobbying group, which represents the UK recorded and live music industry,calculates and publishes the ‘value of music’ every year; currently, it stands at £4.5bn. Yet, this only covers the amount spent on traditional commercial music revenues, such as ticketing, recorded music, publishing, etc.

“That’s not the full value of music,” stressed Jones. “The full value of music is how it delivers healthcare through social prescribing, how it can bring people together, how it drives secondary revenues, how it promotes health, how dancing can help over here, and how choirs are helping lung function and depression over here.

“So £4.5bn is a tiny drop in the value that music can deliver. But, for some reason, we’ve positioned it as entertainment. It’s entertainingbut it’s much, much more than entertainment. We’re missing an opportunity if we’re not embedding music in our work because it’s hugely powerful.”

She lamented how she had been involved in a range of government task forces and committees to prevent music venues from being shut down; with those that succumb often replaced with new apartments and retail units. She explained how she had helped lobby the Government to embed the ‘agent of change principle’ into the UK planning framework. As the principle encapsulates the position that a person or business (ie, the agent) introducing a new land use is responsible for managing the impact of that change, the planning regime now gives some protection to music venues. 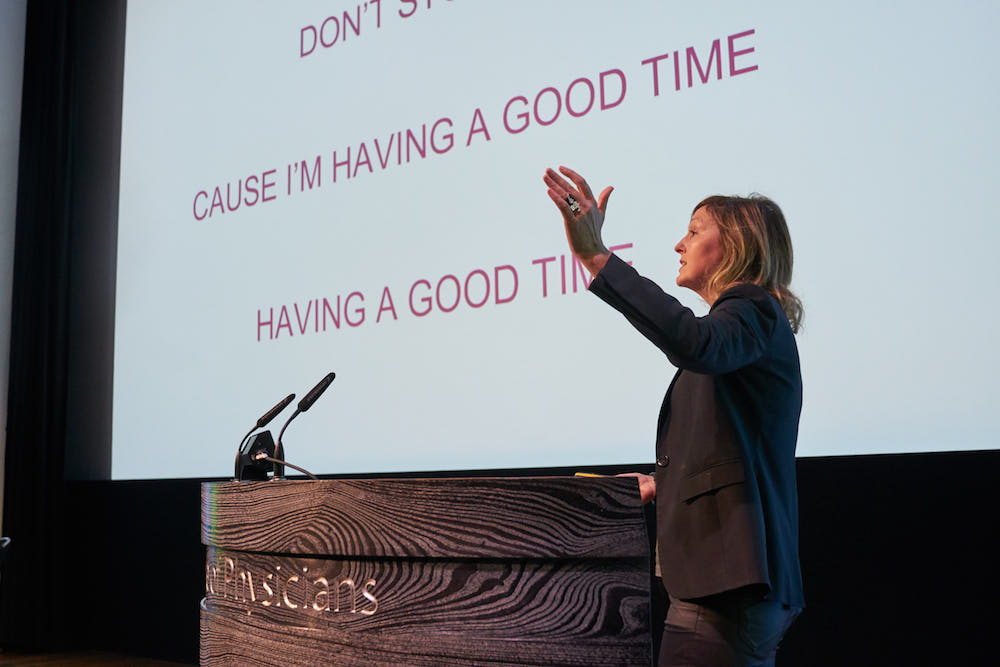 Music as a subject taught on the school curriculum is also under threat, according to Jones, owing to an emphasis on STEM (Science, Technology, Engineering and Maths) subjects. The older generation fares little better, with  just 5 per cent of care homes delivering music to their residents.

“All these commissions set up to fight to save music in our high streets, in our care homes, in our schools – it doesn’t make sense,” said Jones.

Applying music for health and wellbeing

But as the evidence base continues to build, the tide may be turning and solutions are beginning to be grasped. One such approach is for cities to devise a music plan and help bring people together to build a sense of community and social cohesion.

“Cities are now setting up music boards, which have people from health, economic development, and the local music scene all sitting on one board,” said Jones. “We did this recently to develop the first music town in the world: Folkestone.”

The aim is for Folkestone to act as a blueprint for other towns and city boroughs looking to embed music into their social and community fabric.

In healthcare, Jones and her colleagues have helped devise a music strategy for the local NHS trust to support its newly built Dementia Village in Dover.

Workplace design is another area where huge benefits can be reaped. “Open plan offices are the worst places to work,” said Jones. “People are resorting to headphones, but we don’t know what they’re listening to. So how do you embed music into the process?”

Technology and innovation will drive new opportunities, she explained, highlighting a functional music dashboard, which can be used to select tracks for different types of work tasks – for example tracks that help you energise, focus, relax, manage your time, or immerse yourself in what you’re doing.

Concluding, she called on delegates to acknowledge the evidence.

“Be ambitious to embed music in your work, by following these music experience (Mx) principles,” she urged. “Because we’re here talking about utopia, and I can guarantee that utopia is not silent. It has sound and it should have music.”