Making the case for holistic thinking on health

Significantly greater health benefits can be attained through a focus on joined-up and holistic thinking in respect of environmental strategies, according to Dr Audrey de Nazelle, who delivered the opening keynote at this year’s Healthy City Design 2019 Congress.

A senior lecturer from Imperial College London’s Centre for Environmental Policy, Dr de Nazelle set the scene by explaining that the greatest environmental risk in cities today is air pollution, which kills 5 million people worldwide every year, with its biggest contributor being traffic and congestion.

Traffic injuries, she went on, is one of the number-one causes of death among young people in many regions of the world, and the eight leading cause of death worldwide across all age groups.

Solutions to these issues are usually insufficient; for example, barriers might be erected to segregate pedestrians so they can’t interact with cars on the road, but such actions fail to “create a civic sense of sharing and caring for each other in harmony”.

In London, 25 per cent of the traffic in the morning rush hour is due to parents dropping off their kids to school.

“We do it because we think it’s safer for our children but, of course, we’re in this Catch 22 where we create more air pollution and more traffic hazards for our kids, explained Dr de Nazelle.

In London, 35 per cent of car trips are less than 2km – distances that, for most people, are easily walkable or bikeable journeys, and “a wonderful opportunity to integrate physical activity into our daily lives”.

It’s the belief of Dr de Nazelle, however, that we can do much better if we deploy some joined-up thinking, rather than just meeting an air-pollution standard or a physical activity target. She went on to illustrate this belief through various research work she and her colleagues had carried out.

In one example, her team modelled a scenario for Barcelona in which traffic was cut by 40 per cent. The result was the avoidance of 10 deaths attributable to air pollution every year. 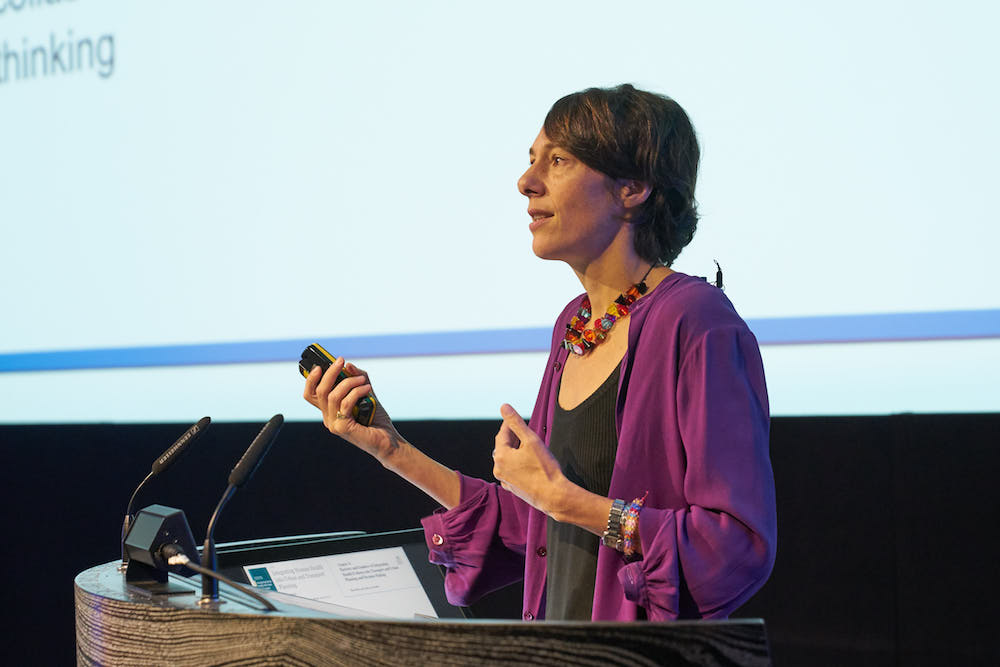 But when factoring the shift of people from their cars and on to bicycles or the streets as pedestrians, the health benefits from physical activity were seven times greater.

“Why do we want to meet an air pollution target?” she asked. “It’s because we want to improve health. OK, so let’s look at overall health benefits. Then we clearly see that there are many, many more benefits from getting people to walk and cycle than only looking at air pollution.”

In another example, she described work by James Woodcock and colleagues, who modelled health policies to combat climate change, and compared a technological scenario with a behavioural one, considering the health co-benefits of these strategies.

In the technological change scenario, where cars were made greener, 17 deaths per million people were avoided, but adding in behavioural change from the removal of cars and encouraging more physical activity registered a staggering 30 times the health benefits compared with the technological scenario on its own.

She went on to describe outcomes of the EU-funded project Physical Activity Through Sustainable Transport Approaches (PASTA), which surveyed 11,000 individuals across seven European cities, and asked them about their everyday lifestyles, travel habits and health. The team looked at participants’ self-perceived health impact for each additional day of travelling by a certain transport mode.

People who cycled more also felt less lonely, and as people walked more, they reported more incidents of social interaction. And each additional day of cycling was associated with the participant registering a lower body-mass index (BMI), while for car drivers, every additional day of driving was associated with an increase in BMI. The difference between a car driver and cyclist was 4kg per adult, said Dr de Nazelle.

But she also questioned where all this research is going, and why, despite such figures, we’re not seeing the kind of impact in the way we design our cities.

“We need to create evidence that makes the case for holistic thinking, co-benefits and trade-offs,” she argued. “More importantly, this evidence needs to be co-created. We need to engage with the decision-makers, with the stakeholders, who will be using this knowledge. We need to make sure that what we produce in terms of research is useful and used by the decision-makers. That’s absolutely key.”

Changing how institutions work, as well as rules and regulations legislation to encourage people to collaborate are also important, she said, suggesting that we need to make it a requirement to include health in decision-making.

She concluded by pointing out that plenty of messages around climate change, the environment, physical activity, etc are “very doom and gloom”, calling instead for “more positive visioning of what cities can look like in the future”.